Paddle On- Fishing from a Canoe in the Boundary Waters

GUNFLINT TRAIL – Our biggest mistake was going too deep.

The walleye must be at 15 ft., we insisted. Everything we’d learned growing up fishing for walleye in North Iowa told us to find a shelf, bounce a jig off the bottom and work deeper in the lake until we found fish. After many hours, we did not find fish. My friend sat in the bow of the canoe and grew restless. So we moved deeper. Jig, move, repeat. Eventually our anchor cord could stretch no more and the sun started to set. Sheepishly we trolled Rapalas on the paddle back to the portage leading home, hooking into one eater-sized walleye along the way. After nine hours of fishing, one 17-inch fish was our reward.

My early season fishing experiences in the Boundary Waters Canoe Area Wilderness (BWCAW) were some version of this for the first few years I lived near this magical outdoor paradise. We found fish, not many, and it was okay. Making up for our modest fishing reports were the fact we were surrounded by giant white pines and ancient cedars. We watched moose browse the shorelines while loons circled overhead. We typically shared the lakes with just a few other people, if anyone at all. We worked hard all the same, lugging aluminum canoes on our shoulders over portages to reach the remote lakes of the BWCAW in hopes of finding walleye, lake trout, smallmouth bass or trophy northern pike.

Once we went shallow, it all changed.

It was a strange man named Brad who gave us the golden advice we needed. Approximately 55 years old and resembling someone who just emerged from a deep pit on Minnesota’s Iron Range, Brad is a no-nonsense kind of guy. To my knowledge he talks nothing but fishing, and when he does speak, he gets right to the point.

“Fish shallow from May through June,” Brad told us. “Very shallow.”

Brad eats roadkill, though that’s not necessarily what makes him strange. What makes him strange is that he avoids human interactions at seemingly all costs. When he is forced to do so, it usually does not go well. Communication and use of the English language, it turns out, are not Brad’s strengths. Fortunately for us, fishing is.

We met Brad near a payphone on the Gunflint Trail, a 57-mile National Scenic Byway that cuts through the heart of Minnesota’s canoe country. He was trying to phone his cousin, he told us that afternoon, to remind him where the shotgun was as “the bears might get into the apple tree.” The payphone wasn’t working, apparently, so we let Brad use the resort phone just down the road. Eventually we started to talk about fishing and the rest, as they say, is history.

Why Brad accepted two naive anglers who grew up fishing in Iowa into his circle of trust is beyond me. I assume he felt sorry for us, though perhaps he saw a younger version of himself when he gave us a once-over. Regardless, as an act of mercy Brad allowed us to accompany him on a canoe trip to the Boundary Waters in 2014. We watched as Brad set his slip bobber to a depth of about 3-ft., attaching a leech to a jig and pitching it not far from the shoreline of a small island. Within seconds, it vanished.

“I don’t believe it,” my friend muttered.

“That is why you fail,” Brad responded, literally echoing the words of Yoda from The Empire Strikes Back and that classic scene where the little green hero teaches Luke Skywalker how to take care of business.

After witnessing the magic, we adjusted our slip bobbers and started to fish the shallows. From that moment on, we’ve landed too many walleyes to remember. And lake trout. And smallmouth. And pike. We’re not yet masters, but we know how to do it right. 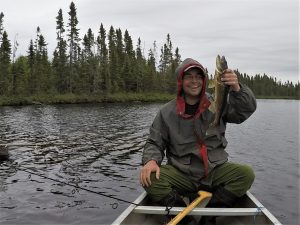 Fishing in the BWCAW means, in most instances, you will be fishing from a canoe. This is a motorless wilderness area where fishing gets back to basics. The Boundary Waters, located along the Canadian border in the far reaches of Northeastern Minnesota, is the best fishing destination I know. By some miraculous twist of fate I now call this place my home, with the BWCAW and prime fishing just miles from my front door. I own two canoes, one a lightweight solo and the other an old aluminum two-seater we called ‘The Basher.’ It’s not unheard of that we need to crash through ice on some of the bigger lakes in the early season, so having a rough and tumble canoe like The Basher comes in handy for spring walleye and lake trout.

Despite our preference to work the leech, jig, slip bobber setup, many anglers choose to troll for walleye using Rapalas no matter the time of year. Others might seek out hidden reefs in some of the larger lakes and dismiss any thoughts about hugging shoreline shallows. To each their own. I follow the advice of Brad and stick shorelines. Place me on a weedline or near an island and I can all but promise to bring home fish, particularly walleye.

The fish that takes adjustment in the early season is the lake trout. Indeed, this is a fish that deserves special consideration. Trolling spoons or Rapalas is a fine approach. However, the window for lakers is narrow. The first two weeks after ice out, which can range from late April to mid-May on any given year, is the best time to chase lake trout in a canoe. The lakers are in shallow, but not hanging on shore like early season walleye are. Trolling or casting in the 10-20 ft. range is an adequate approach for lake trout.

We can’t all find someone like Brad to show us the way to fish in canoe country. Perhaps that is a good thing, as Brad would frighten nearly everyone I know. However, we can pass along his wisdom. During your first, or next early season trip to the Boundary Waters, follow the wise words of Yoda Brad: stick to the shallows.

Joe Friedrichs is the co-host of the WTIP Boundary Waters Podcast. He is also the author of Her Island: The Story of Quetico’s Longest Serving Interior Ranger. 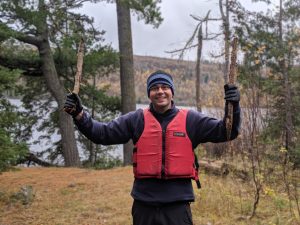